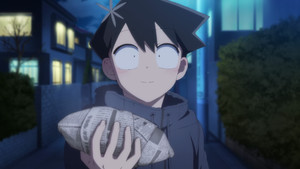 I didn’t laugh as much as I expected during this week’s episode, but I also don’t think the show is particularly trying to be funny most of the time. While everything here is generally framed in a light-hearted and humorous manner, the jokes seemed poised for character introspection rather than being entirely for penetrating laughs, almost all of which at least indirectly relate to the subtle feelings that Tadano and Komi have for each other. Despite thinking the show would be better without Yamai, I loved how the whole joke around her and Nakanaka was that they were so blinded by what they wanted Komi to be that they ended up wasting opportunities to understand it on a very basic level. It highlights the key difference that separates Tadano from the rest of the cast: his negativity means he doesn’t really have any preconceptions to distract from what’s going on around him, making him often the person who can offer the most insight. He’s not perfect or Mary Sue because sometimes he needs help figuring things out or dealing with his own feelings, but I like that we see more examples of his inferring people’s intentions without a lot of communication. In fact, the whole thing about boys imagining themselves dating some other girl from last week comes back here in a much quieter way, reinforcing the idea of ​​teens being blinded by what they see in someone versus how that person actually is.

Tadano’s burgeoning relationship with Katai is also very informative and wonderful, and the little moment he basically tells him he doesn’t need to try hard is a simple yet effective way to showcase their developing bond. We also had a lot of slow, quiet moments for Tadano and Kumi kind of observing each other. Perhaps Tadano is beginning to piece together pieces that Komi might see as something more natural as well, and while he predictably diminishes these burgeoning sentiments, I’m curious how this heightened realization will affect his ability to read others. Will his perceptions of Comey start to change, or will he take the opposite approach and deny the obvious? I could see this going both ways and I’m looking forward to seeing the path he’s on.