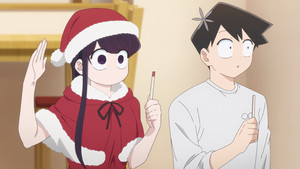 And here we are in the Christmas episode of Komi can’t communicate! Rather than a variety of different skits covering different events at different points in time, this episode focuses on one event but presents it from different perspectives. The event in question is a birthday party that doubles as an early komi birthday celebration, meaning the pressure is on to get a good present. The problem is that these teens have no idea what they’re going to get for each other, which I feel is a huge dilemma for most people, not just awkward teens who have a hard time expressing feelings. It was nice to start off with Komi spending some time with her brother who, despite being younger, seems to be the one to deal with other people’s behavior more. I like the fact that he doesn’t seem to have trouble communicating; He doesn’t speak because he’s just angry and easy to get angry.

The actual Christmas party felt like it lasted a little longer than it should have. Gags like classmates over-analysed how to sit next to Komi and the Kings game was fun in the first few minutes, but lost their power over time. I think it would have been better if those skits were shortened, or maybe we had another skit to fill the runtime. It’s the first time in a while that I’ve taken a gag in this series, but the payoff in the last quarter was really impressive. Komi got a collective gift from everyone in the form of a giant cat she adores so much that no one can tell what she’s thinking was cute enough on her own, but the fact that it was basically Tadano’s idea highlights how they made each other these two are. I note that this season seems to have taken a step back from its laugh-out-loud moments in favor of nurturing that blossoming romance among our connoisseurs. I’m fine with this approach as long as the show understands that viewers may adjust their expectations accordingly.