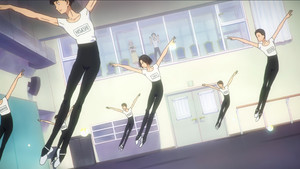 Hello everyone, welcome back to the dance drama of my dreams. Things were a little crazy about ANN editorials; We’re in the middle of this week’s Spring Manga preview guide, but I want to touch on this slightly more subtle follow-up to Episode 5’s big dance performance. We enter a “training arc” of some sort for Jumpei and Luou as they infiltrate the boys’ ballet camp hosted by Oikawa, the judge who wore them to take them on Swan Lake.

This episode also does a great job of adding nuance to the ongoing conflict between Jambi’s enthusiasm, her approach to ballet, and the strong tradition of form. Oikawa tells the boys that ballet is an art and that their performance was not ballet. While full of emotion and drama that captivated the audience, he lacked technical prowess. Perhaps most importantly, Jumpei’s decision to give the stage the finishing touch took time from other dancers, specifically from his studio. You could argue that his decision to indulge his emotions stole theater time from the kids and thus ignored their time and effort.

This is one of Jumpei’s major shortcomings and his biggest room for growth. He is simply not particularly considerate of others, whether it’s elementary school ballerinas, Luou, Miss Godai, Miyako, or even his uncle. Jumpei is prone to flying close to the seat of his pants, or perhaps it is appropriate to say that he does not look before he jumps. This does not only mean that he is causing problems for himself. He is constantly causing problems for other people because he does not think about how his actions will reflect or affect them. Godai loses money because parents are pulling their kids out of her studies because she won’t “release” the Jumpei. Luou misses his chance to win MVP award and study abroad. But Jumpei has promises and his eyes started to widen a little when he started camping.

Through a bit of social engineering, Jumpei and Luou (who drags him there) infiltrate Oikawa’s training program and are only allowed to stay because she sees they hold a promise while also hoping to put them in their place. At first, my closeness to Jumpei’s artistic approach made me stand by him. The child was performing the choreography with pleasure while feeling the music. I don’t know enough when he’s off or when he’s out of pace and I’m easily overwhelmed by his enthusiasm. But his coach kept telling him he was out of sync. This culminates in a conversation he had with the elderly pianist performing class music and finally things start to click on Jumpei (and thus me) about what he’s doing wrong. He returns all circles to his lack of respect for others.

Yes, it is true that Jumpei lacks proper basic technique. Godai was trying to dig this inside of him and was fickle about it because in his eyes, the blissful feeling that ballet gave him trumps anything else. That brilliance is a gift, but as he conversed with the pianist and watched an elite class performance in perfect sync, he began to realize how far from a step he was what was supposed to be a group performance. Jumpei can’t reach the top on his own while running with unbridled pure energy.

The first significant sign that Jumpei took this advice seriously when he and Luou boarded the train back home. Mustering what is frankly a great deal of humility to a middle school kid, he apologizes for his actions on stage and contributes to Luou losing his chance to study abroad. Now, Luou called him that if he had known, Jumpei might have made the same decision, but just getting them to talk about it is a big deal. Jumpei actually allows himself to show weakness and gives Luou some long-awaited respect to forgive this arrogant newbie.

Although not as exciting as the previous one, this episode brilliantly deals with the downfall of Swan Lake and gives Jambi room to grow and finally take his first real step as a ballet student.