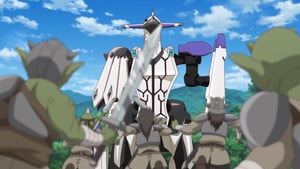 Another strong showing of I leave Heroing. Even if some of the details are a bit silly, the overall direction of the episode is well thought out and unpretentious.

The basic concept here is that Edward is a great warrior but not a great teacher for his troops. This is an idea that I rarely see taken up in anime…or any other medium. Often times the person who is “best” at something is portrayed as the best teacher of that skill. Simply put, that’s not really how it works in real life. Teaching is a special skill in itself, and for teachers, the ability to analyze complex ideas and work with someone who does not understand them is just as important as being able to perform in a particular area.

So having our hero teach Edward how to be a teacher is good style for the episode. I especially like that he decided to do this by putting Edward in the place of his troops. By reminding Edvard of what it means to be clueless and out of your depth in a given situation, he reminds Edward that teaching is not just about effort but about understanding. This also has a nice knockout effect of reminding Edward why his forces look up to him, strengthening their bond.

Ancient robots boast some … interesting designs. They kind of have a Bionicle nuanced, Bible vibe to them, which somehow makes them less interesting than they should be. It’s another example of the mediocre visuals of this series: it’s never so shocking that it causes disruption, but there are shots where almost everything in the scene looks flat. At least we got this sequence of Echidna walking around with their magic spells and detonating them to close the loop.

I’m not sure I’d go so far as to say this series is a must watch, but it’s consistently above average.


Grant is the co-host in Blade Licking Thieves Podcast And Super Senpai Podcast.