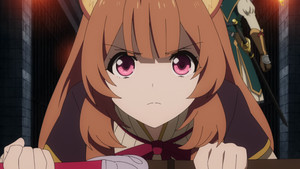 Finally, something that makes me intrigued and invested! After an arc that felt defined by missed opportunities and poorly planned rewards, it was actually nice to see the story focus on something simpler. So at the end of the last episode, our heroes jumped into a magical hole that will transport them to the world of other Cardinal Heroes. However, not only is the crew divided, but they seem to be effectively transported to another world to reset all of their nations to the first level. This means that they are unable to use some of the most diverse abilities, and it also means that some characters have to suffer opposite side effects such as Raphtalia returning to her child form. Admittedly, this reminds me of a previous issue I’m rewriting with the show’s writing in season one regarding how level and age related to some of these characters. This doesn’t seem to apply to humans, but does human age and physical appearance seem to correlate with their level? It also doesn’t look like a straight 1:1 ratio – just because you’re at level one doesn’t mean you’re a year old or anything – and all it does is make me wonder how old Raphtalia is technically supposed to be. Because as far as I can tell, she doesn’t seem to develop mentally or regress when her physical body changes. Raphtalia is often shipped with Naufumi and in many ways is seen as the poster girl for the entire show, so it’s somewhat confusing that this really weird mystery is about how old you’re supposed to be, both physically and mentally.

That quick shade aside, I loved a lot of the callbacks in this episode because they seemed to show a very simple but effective parallel to how far Naofumi and Raphtalia have come. Seeing Naofumi tackle the same issues he faced when he first came into this world with a more hands-on approach and level, is refreshing to see. He still has his natural skepticism, but he really feels like a captain who keeps his head level even in mysterious and frightening circumstances. Speaking of scary circumstances, I really liked Kizuna Lola’s introduction because she looked like one of the meatiest characters we’ve seen in a while. Its circumstances were unfortunate even though it’s not the focus of the episode, and I really like how the cardinal heroes of this world seem to have more unique weapons ranging from a book to a sword that can turn into a fishing rod. I’m not a big fan of how the episode concludes, as it seemed rather comforting that there was a way out that only Naofumi could solve, but being legitimately invested in where the story could go here and what other unique trials of heroes we need to Overcome them now that they are in uncharted waters.

The Rising of The Shield Hero Season 2 Currently streaming on
Crunchy Roll.