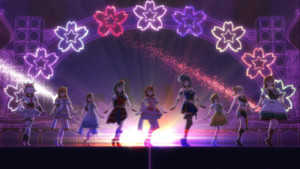 One of the eternal paradoxes love life! is that while it is entirely built around amateur DIY idols, it doesn’t delve into the actual nitty-gritty details that make these girls take to the stage. It’s been there in the background for sure — subplots about a particular group songwriter struggling for inspiration, training scenes where actors get into shape or practice dances — but we never get a full episode about Kotori or Kiki struggling to figure out a stitch on a costume. This is not just how this is Franchise roles, and getting involved in details would hinder his goal and the audience here. This is especially true for NijigasakiSchool Idol Magic seems to let the characters show off completely choreographed musical numbers through sheer force of will.

So it’s a little funny that the entire struggle in this episode revolves around Yu struggling to finish a song On the day it is scheduled to be carried out. In any other show, the idea that they would be able to do this would be absurd, but here in fact it is questionable by the other end. Yes, it’s fine for Yu to write a song for her idol friends, but if that happens, she can always tell them an honest word and the sheer power of their School Idol feelings combined into a new song will show off without anything. The viewer rolls his eyes. Lanzhu does this at the beginning of this episode just for the vamp!

But even if I don’t participate in the immediacy of the conflict, it’s really good to focus on Yu. I’m half joking about her being NijigasakiThe resident harem leader, but a good Harem anime will also make time to embody the hapless protagonist along with his group of potential girlfriends, so it’s important to get a deeper understanding of what makes Yu tick so important. I wish this struggle lasted a little longer, or took more conversations with Mia to find out everything. Mia, before, brings a very valid perspective to her too – it’s ok and good that Yu wants to create a perfect virtual song that sums up her feelings about School Idol Club and also pierces Lanzhu’s heart, but sometimes you have a hard deadline and there’s really no room for being a vocalist Perfect for when you just need to get something ready at the right time.

But this is still love life!And there’s really no room for anything cynical like technical compromise for a deadline. So instead Yu finds her inspiration (pun in part) and realizes she wants to put a part of herself in this song as well, rather than just being a showcase of her harem and a mysterious Lanzhu post. And that’s a very nice feeling to push all of this with – any kind of creative work that involves putting a part of yourself into it, and embracing that idea instead of trying some pure idealism is an important part of the artistic journey. So seeing Yu on stage playing accompaniment is a pretty sure picture. The song itself is okay, if not so special Franchisebut I especially like the animation itself, which I strayed from NijigasakiHis usual style features a full stage performance with some stellar animation of CG characters. There’s an uninterrupted Spielberg-style shot of an honest god that manages to show each character as the frame moves smoothly across the stage, and it’s so well integrated that you might fool me into thinking it was traditionally animated. One day I’ll stop liking how far this is FranchiseThe dancing animation has come, but as long as CGI Honoka’s dead, soulless eyes are etched into my mind, I’ll continue to praise them when they do things right.

Overall, this episode is definitely an improvement from this season’s lowest points, and I’m grateful for some much-needed focus on Yu. But at the same time, this conclusion to this packed School Idol festival can’t help but want more time to develop the other cast. Lanzhu and Mia could really get focused before now, rather than seemingly waiting for it to come after our main team had their rings. As it stands, this is a good enough emotional climax, but it really feels Nijigasaki Swings under the size of its mold.