Brought to you by GKIDS, The Deer King comes to Blu-Ray + DVD on October 18th and all major digital platforms on October 4th, 2022 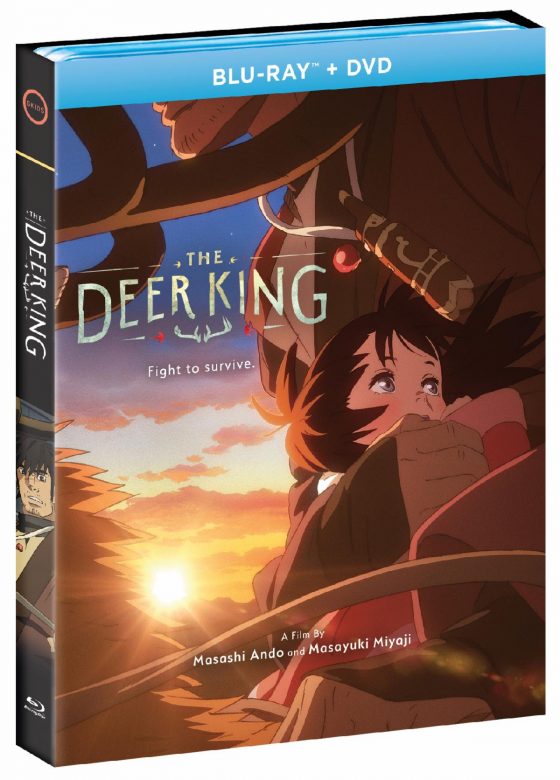 The highly anticipated new animated feature The Deer King will come to Blu-ray + DVD on October 18th and to all major digital platforms on October 4th from GKIDS distributed by Shout! factory. Additional features in the release include conversations with the voice actors, an introduction from director Masashi Ando, ​​a design gallery, and more.

The Deer King is based on the award-winning series of fantasy novels by author Nahoko Ohashi, which has sold over two million copies and won major literary awards. Animated by acclaimed production studio IG, the film marks the directorial debut of acclaimed animator Masashi Ando, ​​who previously worked as character designer, director animator, and lead animator with the acclaimed Studio Ghibli (Spirited Away, Princess Mononoke), and with directors Satoshi Kon. (Paprika, “The Paranoia Factor”), and Makoto Shinkai (Your Name). Co-director Masayuki Miyaji is best known for directing the 2009 series Xam’d: Lost Memories and working on Studio Ghibli films such as My Neighbors the Yamadas. Known for their work on feature series and animation, notable works from animation studio Production I.G. include the legendary film Ghost in the Shell, the highly influential series FLCL and Haikyu!! and Psycho-Pass.

An action-packed animated movie with dazzling animation, The Deer King is an amazing survival story. After a brutal war, ex-soldier Van toils in a mine controlled by the ruling Empire. One day, his solitary existence is turned upside down when a pack of wild dogs is attacked by a deadly, incurable disease, leaving only Van and a little girl named Yuna alive. Finally free, a couple seeks a simple existence in the countryside but is haunted by sinister forces. Determined to protect Yona at all costs, Van must uncover the true cause of the plague ravaging the kingdom – and its possible cure.

Main directorial debut of Atsuko Ishizuka, Trails Ahead to Blu-Ray + DVD on December 27 and on digital platforms on December 13, 2022 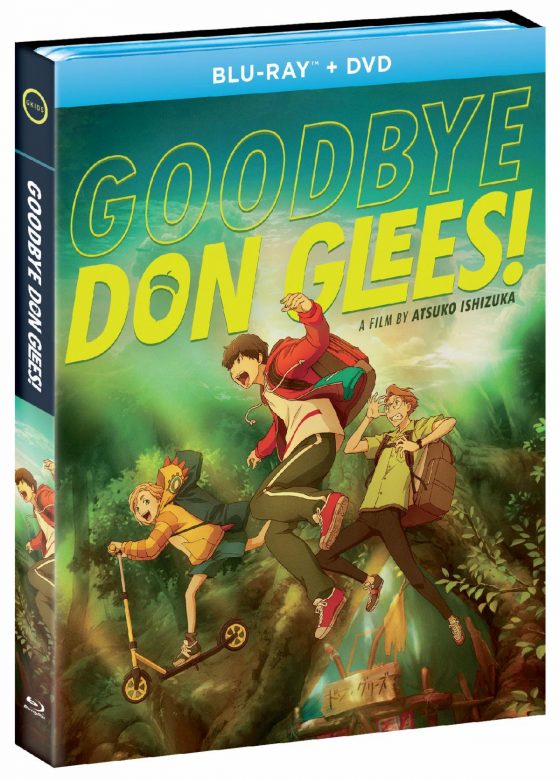 Upcoming anime film Goodbye Don Glee! It will arrive in a Blu-Ray + DVD combo edition on December 27 and will become available on major digital platforms on December 13 from GKIDS with distribution by Shout! factory. This touching anime adventure features an interview with director Atsuko Ishizuka and is now available for pre-order on GKIDS.com and ShoutFactory.com.

Teenage misfits Roma, Toto, and Drop call themselves “Don Babysitters,” an unofficial name for their backyard adventures. One day, when the trio are blamed for a nearby forest fire, they set out into the woods to prove their innocence. With disaster befalling their expedition, tensions flare between the friends as they realize that growing up has taken them on very different paths in life.

Director Atsuko Ishizuka continues her critically acclaimed series A Place Beyond the Universe with her first original feature film. With luminous animations and lush backgrounds, bye-bye, without babysitters! is a tender coming-of-age story about the fear of being young and a bittersweet journey of self-discovery. 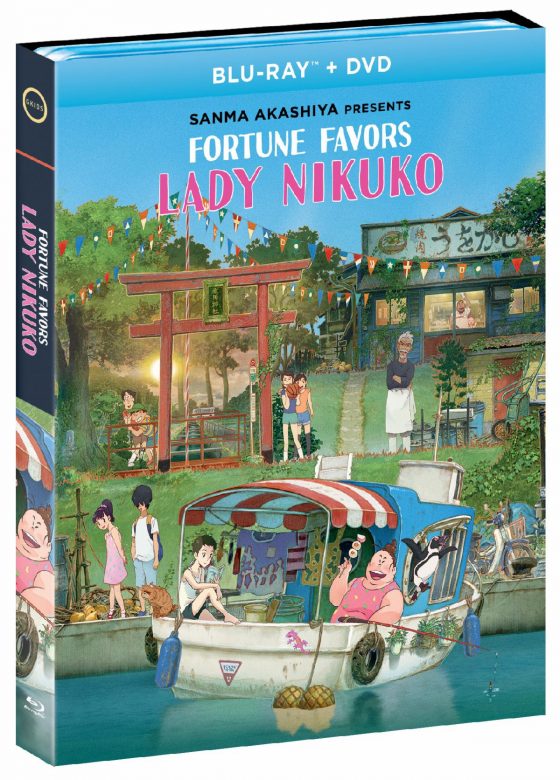 The charming animated Fortune Favors Lady Nikuko will be released on Blu-Ray + DVD combo, as well as for digital download on all major platforms, from GKIDS, with distribution from Shout! Factory July 19, 2022. The Blu-Ray + DVD combo, packed with bonus features including the “Making of” documentary, is currently available for pre-order at GKIDS.com and ShoutFactory.com.

From acclaimed director Ayumu Watanabe (Children of the Sea) and STUDIO4°C (MFKZ, Mind Game) comes a warm and poignant comedy-drama with touches of magical realism. Fortune Favors Lady Nikuko is about an unconventional family and the bond they share in their sleepy seaside town.

Planned and produced by beloved Japanese actress and comedian Sanma Akashiya, Fortune Favors Lady Nikuko was based on the novel of the same name by Kanako Nishi. The thriller took home the Axis Award: Satoshi Kon Award for Excellence in Animation at the Fantasia International Film Festival and went on to collect accolades including a Best Independent Film nomination at the 49th Annual Annie Awards.

Brush’s single mother, Nekoko, is known for her daring spirit, much to the embarrassment of Kikuko, her pensive and imaginative daughter. Unlike her mother, Kikuko wants nothing more than to fit in with the daily social dramas of middle school. Life in Marfa is peaceful until a shocking revelation from the past threatens to uproot the couple’s tender relationship. 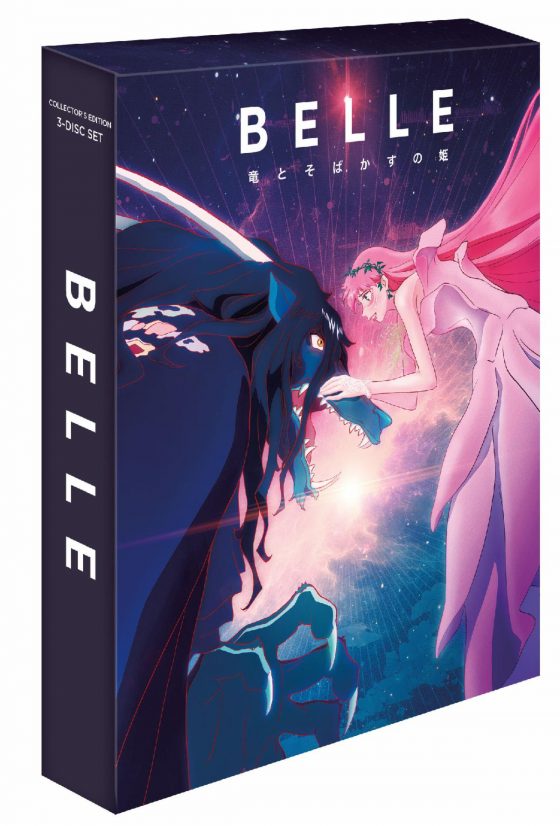 BELLE, the fictional and heartfelt story of growing up in the age of social media from acclaimed Academy Award-nominated director Mamoru Hosoda and Studio Chizu (Mirai, Wolf Children, Summer Wars), will be celebrated with a deluxe collector’s edition, to come. August 30, 2022 from GKIDS with distribution by Shout! factory. A 3-disc set, BELLE COLLECTOR’S EDITION will include the movie in UHD™ + Blu-ray™, will be available in both the original Japanese and English languages, and includes a bonus disc containing exciting new special features, wrapped in beautiful deluxe packaging.

BELLE was released on all major digital platforms on May 3, 2022, as a Blu-ray + DVD combo pack and in an exclusive Target Steelbook edition on May 17, 2022.

BELLE boasts a star-studded English voice cast including Chace Crawford, Manny Jacinto, Kylie McNeill and Hunter Schafer. Fans of this heartfelt tale in the digital age can pre-order copies now by visiting ShoutFactory.com And the GKIDS.com/store.

At BELLE, the Japanese creative team worked in collaboration with a roster of international talent. Character designer Gene Kim, the artist behind many popular Disney features including Moana, Tangled, and Frozen, designed the titular Belle. Oscar nominees for the cartoon Saloon, Tom Moore and Ross Stewart (Wolfolkers, Song of the Sea, The Secret of Kills) join the team, contributing artwork to the various virtual fantasy worlds within the film. Hosoda continues his film collaboration with architects and is joined by up-and-coming British architect and designer Eric Wong, who designed the virtual world of “U.” Taisei Iwasaki (“Blood Blockade Battlefront.”, “Giant God Warrior Appears in Tokyo” by Studio Ghibli) along with original songwriting and score, was led by several composers and the entire film’s music production. Other composers are the critically acclaimed Yuta Bandoh (“Yuri on Ice”) and the BAFTA-nominated Ludvig Forrsell (Kojima Productions “Death Stranding”). The main theme of the movie “U” was performed by the leading Japanese Millennium Parade, led by songwriter Daiki Tsunita.

Suzu is a shy high school student who lives in a rural village. For years, she was just a shadow of herself. But when she enters “U,” a huge virtual world, she escapes into internet persona Belle, a gorgeous, universally beloved singer. One day, her party is interrupted by a monstrous creature that was chased away by the guards. As their hunt escalates, Suzu embarks on a passionate and epic quest to uncover the identity of this mysterious “monster” and discover her true self in a world where you can be anyone.