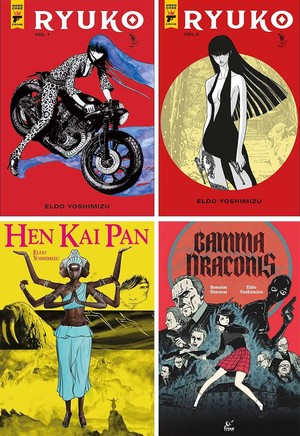 manga artist Ildo Yoshimizu will be in Signature At Forbidden Planet in London on Saturday 11 June, from 1pm to 3pm.

“Ildo Yoshimizu Born in 1965 in Tokyo. He majored in sculpture while studying at the University of the Arts in Tokyo, and installed many works in the public space… Exhibitions in Japan as well as throughout Asia and New York in 1994 led him to a scholarship as an “artist-in-residence” in New York. In 2003, he realized the “First Light” work of art and exhibition space in Louis Vuitton Branch in Omotesando [in Tokyo]. Feeling his hunger for contemporary fine art satisfied, he turned to Gekiga and began to focus on the interplay of object and space in the art of storytelling. He also works as a photographer and musician.”