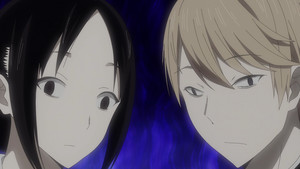 Sometimes I forget that the adults on the show seem to strike that perfect balance between insight and totally crazy. This is the balance I strive to achieve as I get older. Speaking of getting older, the idea of ​​changing the seasons and everyone preparing for the next stages of their life looks to be the catalyst for some major developments along the way. A large part of the main actors are in their last year of high school after all, and this episode is down to the fact that the time they spend together in the student council room gets more and more specific with each passing day. This likely foreshadows how the season will turn out, and I would like the show to continue to tilt alongside the puberty that has been played over the latter half of his career thus far. Tying that into the main romantic component of the show seems to be the next logical step.

That ticking time bomb was the catalyst that finally got Shirogane out of his ass and going forward to ask Kaguya on a date that was actually quite surprising . His determination to be the one to confess to her if nothing happens before the cultural festival shows that there is a potential end to the series on the horizon. Having said that, this episode also left me feeling pretty conflicted because I feel like the first two thirds of this episode were a great buildup of something that eventually came to “No, not yet!” On the one hand, I really wanted them to go on that date, especially after the constant teasing, but on the other hand, I can’t deny that I laughed so much at the decision to fall apart on itself because these two couldn’t have that extra pinky toe forward after making so much progress to get to this point. I get that part of the appeal and I really think the clip is cool, but please tell me I wasn’t the only one who wanted to toss their drink on the wall? It’s rare that you come across a show that makes you frustrated and hilarious at the same time, but I think this is a testament to the quality Kaguya-samaWriting. In fact, I wish the episode would end in that sitcom; Shirogane’s final sitcom trying to look at himself objectively seems a better fit as an opener, as it may have contributed more to the backlog of history demand, but that’s just me. I’m very curious about the implications this episode will have on the rest of the series. Can we finally see a resolution for the main lead of the show? I guess we’ll just have to wait and find out!