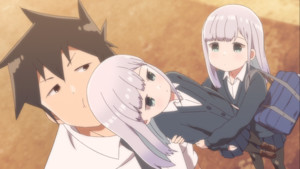 I have to give Aharin San Credit: It really does have a dramatic range. It has certainly been shown to handle lulling moments of sweetness, and Bread and Butter is pure comedy. But this week Aharin San He takes things a step further, wading into a frightening horror like himself higurashi Can’t dream of achieving it.

At least for me. Look, here’s a little fun from my anime backstory: When I was a little kid, my mom would make a doll that looked just like me, apparently a gift to my grandparents who lived in several states. This might sound like a nice little idea to anyone who hasn’t spoiled their cerebral cortex with horror movies, but let me tell you there’s nothing scarier than walking into a room and seeing a dead little version of yourself as a kid. And they moved it frequently when redecorating rooms, which meant that every visit to Grandma and Grandpa’s house was a minefield of psychological horror. So when Rena made a completely identical life-size doll for herself and then gifted it to Raido, I really wanted to crawl out of my skin in order to escape from it. A truly terrifying act of all involved. great work.

Out of giving me night terrors, this is another scattered episode of Aharin SanThankfully, though, the jokes are much stronger than the last time it happened. Although they don’t transfer very well between each other, the various acting segments of this episode are all pretty solid stuff, with each featuring at least a couple of cool gags. And really, when you have hardcore streaks, who needs transitions? Mitch Hedberg never bothered with these and people still quote his best jokes nearly two decades after his death. granted, Aharin San It didn’t match the comedic elegance of “I wanted to buy a candle holder, but the store didn’t have one, so I got a cake” but I think they could do that one day if they tried. If avoiding the narrative structure and turning to a series of moving ideas and representations is what we need to get there, then by all means begin.

And this is definitely an episode in which I find myself enjoying the little distractions and flourishes that the show can add to the gags. We’re now pretty accustomed to Raido’s formula going in the unruly inner shadows over simple situations, but small additions can make that expected rhythm ridiculously funny on their own. Like the joke about getting Reina pregnant for the rest of her life, there’s some good escalation, but the cherry on top gives Old Reina a mustache, too. Or he had Raido try Light Yagami his way through Old Maid, only to get himself knocked out for the win. I especially loved checking in again with Futaba after the bento sitcom, because the first thought I had was, “Wouldn’t that spoil lunch overnight?” And lo and behold. These aren’t world-changing punchlines, but they do add a bit of silliness to the whole affair to make it so memorable.

On the flip side, if I have one complaint about this episode, it’s that the new characters officially introduced here are completely forgettable. None of the secondary actors have been amazing so far, but Futaba and Oshiro at least have unique personalities that clash with our heroes in some funny and amusing ways. Ishikawa and Sato can be exchanged for faceless models for whatever they bring to the table. This makes it all the more weird that they are apparently notable enough to be included in many of the main visuals and the OP, because I couldn’t tell them from Adam or Eve based on design or situation. It’s not enough to kill any of the gags — our lead duo is as rock-hard as ever when sharing scenes with these guys — but it’s still frustrating to see the rest of the band struggle to keep up with the comedy department. Right now our strongest candidate for a bronze medal is the Reina dog, and that’s mostly because they are a very good dog. yes they are. yes they are..

Again, it’s hard to complain so much when Aharin San It works fine with what it knows works. While the weaker cast members might keep this from being a comedy all the time, that doesn’t mean what we already have isn’t good on its own.