The new season airs in 3 movies this fall

The season will consist of three parts with limited theatrical performances for three weeks starting on September 30, October 28 and November 25. Previous seasons were shown first in theaters as well before being broadcast as television anime episodes. 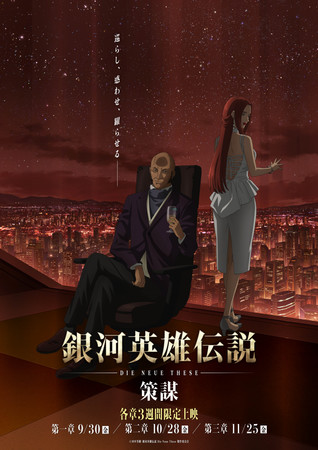 The one on the right shows Adrien Rubinsky, Landesherr of the Free Dominion of Phezzan, with his companion Dominique Saint-Pierré. The visual highlights the main entry of the businesswoman Phezzan Dominion into the story.

Legend of Galactic Heroes: Die These – Collision (Legend of Galactic Heroes: Die Neue These Gekitotsu), the third season, debuted as a feature in theaters, with the first and second opening on March 4 and April 1. The third movie opened on Friday. The third season is also shown on television for 12 episodes (numbered as episodes 25-36 in the series total).